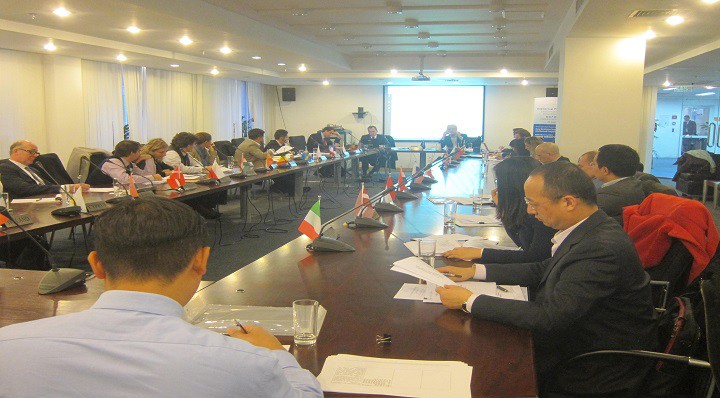 IP Key held the Inter-EU Industry Association Roundtable for Finalising Comments on the Draft Implementing Regulations to the Chinese Trademark Law on January 27, 2014, at the Delegation of the European Union to China and Mongolia (EU Delegation) in Beijing, China.

The roundtable brought together over 30 representatives from different EU Member States' chambers of commerce, the European Union Chamber of Commerce in China (EU Chamber), the Quality Brands Protection Committee (QBPC), the International Trademark Association (INTA), and other institutions. The main areas of discussion were comments and suggestions on the draft Implementing Regulations to the Chinese Trademark Law (hereafter "Draft TM Regulations"), promulgated by the State Council’s Legislative Affairs Office (SCLAO) for public comment on January 10, 2014, and on which comments are due by February 10, 2014; also, strategies were discussed for lobbying the Chinese authorities to improve areas of the Chinese trademark system not addressed by the implementing regulations.

The roundtable began with welcome remarks by Francisco Pérez-Cañado, Minister Counselor and Head of the Trade Section at the EU Delegation. Davide Follador, Technical Expert with the IP Key Team, then introduced the IP Key project and the structure of the roundtable.

Paul Ranjard, Chair of the European Chamber's IPR Working Group, provided an overview of the main concerns and suggestions of the European Chamber on the Draft TM Regulations. Roundtable participants discussed these and other points, including but not limited to: the need for additional provisions setting timeframes for local Administration of Industry and Commerce (AIC) procedures, clear administration rules on divisional applications, lack of full motivation/ legal grounds in opposition/ non-use invalidation decisions and, therein, the need to address the current lack of opportunity for exchanges between parties; need for improving criteria to assess trademark similarity and comparison of goods; need to re-introduce the possibility to always review opposition decisions before Trademark Review and Adjudication Board (TRAB); and need for more flexible rules to prove likelihood of confusion in original equipment manufacturer (OEM) contracts-related infringement cases.

Concluding the roundtable, Dan Prud'homme, Technical Expert with the IP Key Team, summarised several initiatives for further involvement in the development of the Chinese trademark system related to the Draft TM Regulations and TM Examination Guidelines. These include attendees of the day's IP Key roundtable finalising their own comments to submit to SCLAO; IP Key's engagement with OHIM and the State Administration of Industry and Commerce (SAIC) in an upcoming roundtable on trademark quality; OHIM's work to enable SAIC to adopt TMView and TMClass; potential TM-related activities organised by IP Key with the courts and other government bodies; a potential IP Key study on issues surrounding China's OEM rules; among others.