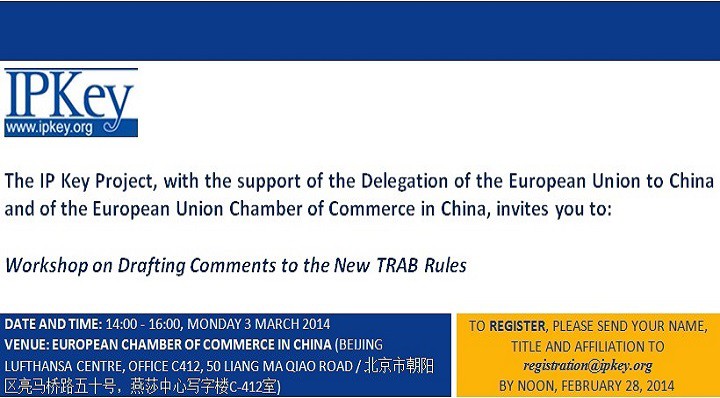 On very short notice - due to the tight national legislative agenda - IP Key held an experts' workshop on "Drafting Comments to New TRAB Rules" on March 3, 2014, hosted at the European Union Chamber of Commerce in China (EUCCC) in Beijing, China.

The workshop brought together 28 experts from different EU Member States' Embassies, the EUCCC, the Quality Brands Protection Committee (QBPC), IP law firms, EU industry, academia, and other institutions. The specific scope of the workshop was to draw up technical comments and recommendations on the draft TRAB Rules, which had been published by the State Council’s Legislative Affairs Office (SCLAO) for public comment on February 10, 2014, and on which comments are due by March 11, 2014. The conclusions of the workshop will feed into the official recommendations that will be sent by the EU Delegation to the Chinese authorities.

The roundtable began with welcome remarks by Maggie Xie, Head of Government Affairs at EUCCC. Christophe Gimenez, Trade Section, introduced the workshop on behalf of the EU Delegation. Davide Follador, Technical Expert with the IP Key Team, then explained the workshop’s agenda and structure. Frameworks for discussing comments and suggestions on the new TRAB Rules were presented by adopting a comparative EU-China approach and interacting with the participants.

Furthermore, Feng Shujie, Associate Professor, School of Law at Tsinghua University, gave some insights into the Chinese approach to the draft TRAB Rules. OHIM expert Panayotis Geroulakos joined the workshop by telephone from Alicante to contribute OHIM’s point of view.

The discussion, moderated by IP Key, enjoyed lively participation and addressed several aspects of the Rules by drawing recommendations for amendment, among others: best practices in the invalidation/ review procedures, oral hearing, assessment of evidence; reduction of legalisation and notarisation burdens; conditions for settlement and mediation rules; re-introduction of longer timeframes for providing documents and defences especially in the case of foreign parties; confidentiality issues; and the principle of good faith and evidence.

Concluding the meeting, Davide Follador summarised the outcome of the workshop and pointed out future actions on the IP Key agenda geared towards contributing to the development of the Chinese trademark system at this stage of the legislative process. These will include peer-to-peer exchanges with China on trademark best practice and trade secrets as well as seminars on the CTM system, all of which serve to convey EU/ OHIM’s best practices for consideration into the upcoming revisions to the Trademark Examination Guidelines and application of the TM Regulations/ TRAB Rules. OHIM’s IP Attaché at the EUD, Christophe Gimenez, also reminded the audience that OHIM is bilaterally, with IP Key funding, working with the State Administration of Industry and Commerce (SAIC) to implement TMclass and TMview, two databases aimed at improving trademark quality in China that are also a useful tool to prevent bad-faith registrations by heightening transparency. Finally, the IP Key Team will follow closely the upcoming SPC interpretations on the Trademark Law, TM Regulations and TRAB Rules.