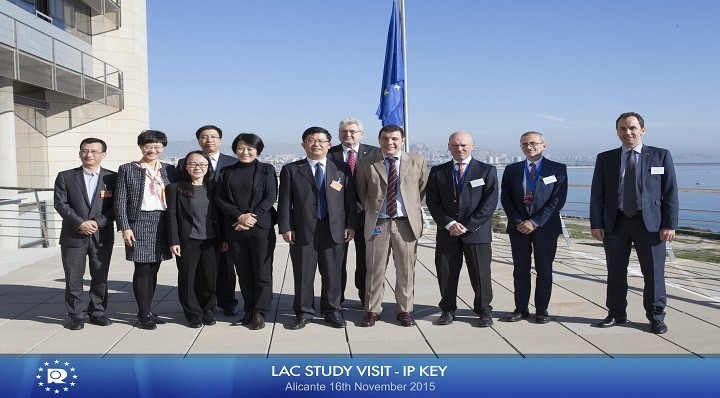 The Legislative Affairs Commission of the National People’s Congress, Standing Committee of the PRC (in short, LAC) is in the process of further revising the Chinese Criminal Code (lastly revised in 2012), LAC Department of Criminal Law is going to be working, in particular, on the amendment to the chapters regulating IPR crimes.

IP Key and LAC recently partnered in the organization of a study visit for a DG-level delegation of the Legislative Affairs Commission, which unfolded in peer to peer exchanges in Rome (Italy) and Alicante (Spain) between November 11th and 18th, 2015.

Meetings  in Rome were hosted at the Ministry of Foreign Affairs, where the Chinese delegation engaged in policy reform discussions with experts from the Ministry of Justice, National IP Office, Law Enforcement, National Prosecutor Office, Customs and the industry. A special visit to the Italian Parliament was organised with the support of the Italian Embassy in Beijing and the Ministry of Foreign Affairs, here the delegation had the chance to learn about the workings of the Anti-Counterfeiting Investigative Commission led by MEP Antonio Catania.

Italian legislation is among the most advanced in terms of fight to organised crime, including on the confiscation of proceeds of crime, and the government in 2009 decided to extend by ad hoc law the application of the UN "Palermo Convention" (against organised criminal organisations) to IPR matters.

In this “study visit”, LAC also met with experts of the EU Observatory on Infringements of IPRs at OHIM in Alicante. The EU Observatory's experts - prominent national prosecutors, law enforcement/customs officials and judges - presented the workings and e-databases of the Observatory to support IPR owners and member states’ law enforcement professional in the fight against counterfeiting and IP infringements.  They also provided information about legal frameworks and criminal prosecution practices in Denmark, France and UK among other EU member states.

The above peer-to-peer exchanges  further contributed to develop cooperation channels between EU and China on the criminal enforcement of IPRs and allowed the EU side learn more about the policy priorities set by China in the reform of the Criminal Code, with particular regards to IPR violations. IP Key is particularly grateful to the LAC for this opportunity of cooperation.