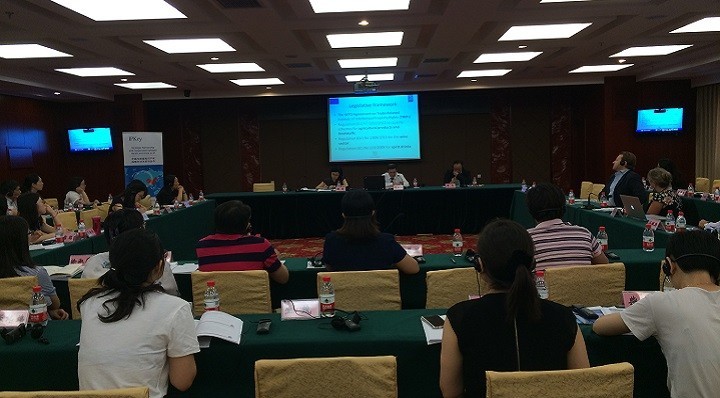 On June 23 and 24 the European Commission and the State Administration for Industry & Commerce partnered in a two-day expert roundtable that  featured Chinese and EU experts’ discussions on major issues in the protection of trademark and Geographical Indications. The event was hosted at SAIC premises in Beijing and focused – in particular - on the challenges encountered by examiners in adjudicating oppositions and invalidations of trademarks filed in “bad-faith”. The two parties further worked towards reaching a common understanding on (a) how to prove bad-faith, (b) what kind of evidence are required and (c) how to cope with the difficulties posed by the evolving scenario of fraudulent practices by trademark squatters on e-commerce and online.

SAIC invited approximately 50 CTMO/TRAB examiners to share experience from their daily work with EU colleagues. Representatives of the EU Delegation and EU Member States embassies in Beijing as well as IP lawyers attended the event.

In the opening remarks, SAIC was stressing how protection of brands’ owners and IPRs is a priority in the current policy agenda of the Chinese Administration. The CTMO’s workload is accouting for 2.8 millions applications in 2015, with the registry maintaining more than 10.000.000 active trademark registrations. As regards GIs, in 2015 the total figures were 3.400 registrations (collective and certification marks), only 84 of foreign origin. TRAB is coping with a growing number of cases every year, between opposition/refusal reviews and adminsitrative litigations. Apparently, 50% of the case load concerns ”bad-faith” trademark applications.

Minister Counsellor Benoit Lory gave opening remarks on behalf of the EU. According the Joint Communication of the EC to the European Parliament and the Council of June 22, 2016, IP is still playing a major role in the bilateral trade relations between EU and China. China is the second economic partner of the EU and the EU is the first economic partner of China. The year 2015 marked the 10th anniversary of the EU-China IP Dialogue mechanism, now upgraded in its political level. The two parties have defined new priorities, among these bad-faith trademarks and protection of GIs continue to be major issues of discussion.

Bad-faith trademarks monopolised most of the discussion of the first day and experts debated over several points:

The EU side further introduced the EUIPO TM View tool, presenting its main features to the Chinese audience and explaining how this could be a useful IT tool to help spot bad-faith applications:

On the second day, EU and Chinese experts debated over GI protection mechanismsProtection of GIs, particularly:

•     criteria for registration of collective and certification marks in China;

•     standards for examination of regulations of use/technical files;

•     presentation of the EU sui generis GI system and update on the ongoing negotiations between EU and China.

In the second half of 2016, SAIC and the EC will organise a set of roving seminars. FOR MORE INFORMATION, PLEASE CLICK HERE.