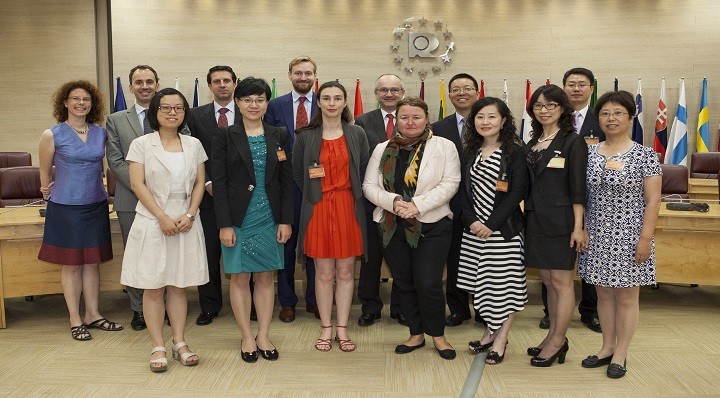 IP Key successfully completed a study visit to Europe for a delegation of the Supreme People’s Procuratorate, led by the Deputy Director General of the Investigation Supervision Department and including prosecutors of Provincial Procuratorates.

The study visits took place in France (Paris), Spain (Alicante) and in Italy (Milan and Rome), between July 2 and 9, 2014

With the facilitation of IP Key, EU experts engaged the six Chinese delegates in technical exchanges concerning certain topics of interest for the future legislative reforms on Criminal IPR enforcement.

In Paris (July 2-3) the delegation entered into two days of productive roundtable discussions with French experts from the Courts, Customs, HADOPI, INPI and French Gendarmerie. The meetings were hosted at UNIFAB (www.unifab.com) and included a session with representatives from the industry. Topics of discussion included: public prosecutor model and judicial procedures in France; French IPR crimes; coordination between criminal, civil and administrative enforcement; police investigations techniques and procedures in France; graduated responses approach to online counterfeiting; recent studies on IPR criminal enforcement in Europe; the issue of “cybercrimes”; the industry experience in fighting IPR violations in China.

During the discussions, the Chinese delegates were asked to present the current structure and functioning of the Procuratorates in China, from the perspective of their powers of supervision, coordination and education of prosecutors.

The meetings at UNIFAB were concluded by a visit to the Museum of Counterfeiting, collecting several examples of fake products and showing to the public the enormous damages caused by IPR violations to the economy and consumers.

The study visit proceeded to Alicante in Spain, where a one day workshop with experts from the European Commission (DG HOME), Europol, EU Observatory and Spanish Police was hosted by the EU Observatory at OHIM (https://oami.europa.eu/ohimportal/en/web/observatory/home).

The SPP’s delegates showed particular interest into knowing more about the coordination role of Europol (which takes form of ad hoc meetings with Police authorities from different Member States involved in an investigation as well as IT tools such as powerful databases), the activity of the EU Observatory and the cases enforced by the Spanish Police.

In Milan (July 7) the morning session was hosted by INDICAM (www.indicam.it), which facilitated a roundtable between experts from the Public Prosecutor Office, United Nations (UNICRI), the Ministry of Economic Development (PTO and National Anti-Counterfeiting Council) as well as the industry. The experts gave presentations on: recent legislative developments in Italy, with particular regards to the IPR criminal enforcement and government’s policy; the Italian public prosecutor “model” of Bergamo on IPR crimes; the links and connections between counterfeiting and organized criminal organizations. In the last part of the sessions selected recent cases of large scale IPR violations of Italian companies operating in China were presented to the delegation.

During the afternoon session, hosted at the City Hall at Palazzo Marino with the presence of local political representatives, the topics of discussion focused on the participation of right holders in IPR criminal procedures as well as on the legal instruments provided by the Italian law to secure evidence and assets for evidence collection. Technical contributions were provided by public prosecutors, lawyers and academics. During this session, the experts stressed on the importance of designing a model for prosecution of IPR crimes that takes into account the economic impact of these crimes, thus following the financial transactions and providing punishments that affect the infringers’ assets.

The experts provided also information about the legal remedies recently introduced in Italy against online copyright infringement, through the simplified administrative procedures implemented by AGCOM (visited on July 8) which allows a fast response to the presence of infringing contents on the web (responsibility of hosting providers).

During the visits that took place in Rome (July 8 and 9), the Chinese delegates were engaged in discussions with the Guardia di Finanza (GdF), the Italian Customs and AGCOM.

The meeting at GdF (www.gdf.gov.it) was the chance to introduce the delegation to the activity of this Police Corps, which has exclusive competence in Italy for all economic crimes, including those against IPRs. Several officers of the Commanding General Headquarter welcomed the delegation and subsequently addressed in details the Italian law framework on IPR crimes (which includes all registered IPRs as well as GIs and Made-In) and the activity of GdF in the fight to criminal organizations involved in counterfeiting, which often make use of the revenues from the business of counterfeiting to finance the international trafficking of drugs, weapons and human beings. According to recent statistics, the overall turnover of counterfeiting is estimated in 6.9 billions Euros, with losses for the Tax Bureau of 1.7 billions Euros.

In Italy, the reforms of 2009/2013 introduced important changes, enabling the Police forces with investigation instruments and powers normally applied to organized crime (under cover investigations, acquisition of telephone communication data, etc.) and increasing the penalties for IPR crimes, by providing a special punishment regime for individuals and legal entities involved in the organized crime.

GdF also presented SIAC, a project funded by the EC aimed at creating an interactive database that provides a platform for right holders and enforcing authorities, where information and data concerning IPR infringements are efficiently collected and promptly made available to stakeholders, for a better coordination of the enforcement actions.

Finally, GdF stressed on the importance of coordination, on a national level of the different government agencies and institutions involved in IPR enforcement (in Italy, under the CNAC).

In the afternoon of July 8, the study visit continued at AGCOM (www.agcom.it), which is one of the few administrative authorities of the world (together with French HADOPI) that has been empowered by the law with enforcing measures aimed at tackling the phenomenon of online IPR infringement.

Finally, on July 9 the delegation visited the Interregional Direction of the Italian Customs (www.agenziadogane.it).

The experts introduced the activity of the Italian Customs, particularly focusing on the coordination between Customs and Public Prosecutor Office, which can delegate investigation and evidence acquisition tasks to the Custom’s officers. Several practical cases were presented.

The presentations by the Customs’ experts and by the prosecutor invited to the roundtable, stressed on the importance of enhancing the international cooperation between Customs authorities, especially outside EU, as well as introducing stricter controls over goods in transit (not released for free circulation in the EU), since recent trends show increasing volumes of counterfeits with Chinese origin that enter the EU single market from Northern European countries (goods in transit destined to other EU countries).

In the course of the meetings, the SPP delegates interacted openly with the EU experts and institutions met, by providing information and feedback concerning recent examples of successful criminal and administrative enforcement cases in China that were supervised by the Procuratorate.

The exchanges highlighted the importance of continuing exchanges between EU and China on the matter of IPR criminal enforcement, also improving the level of international cooperation in investigations and evidence acquisition.