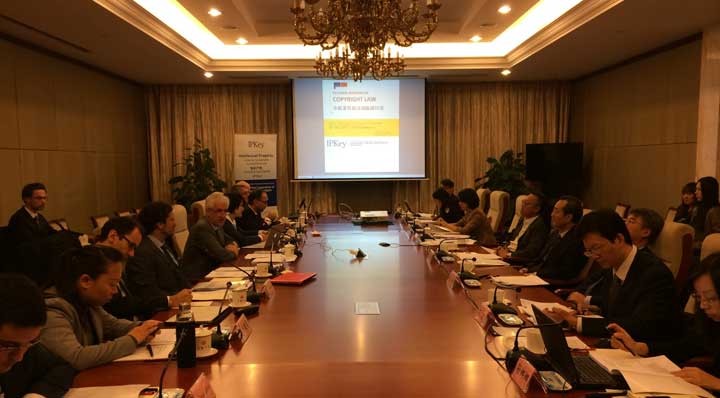 Building on the outcome of the study visits conducted earlier in May (see relevant summary report for additional information), IP Key and the Legislative Affairs Commission at the Standing Committee of the National People’s Congress (LAC) held a follow up experts’ roundtable at the Conference Center of the National People’s Congress in Beijing, to address – mainly from an academic perspective - a range of copyright-related topics relevant for the current legislative reform.

IP Key invited academics from UK and Germany as well as DG Trade to join as key speakers for this purpose.

Presentations of EU experts provided an analysis of the current set of EU Directives and as well as selected Member States national laws (Germany and UK) on the following issues:

Contributory infringement of ISPs should be assessed on the basis of the actual behaviour in the specific case (content/host/access provider) and with regards to their “monitoring” duties.

The main trend in German case law seems to be towards a more proactive role for content and host providers, at least under certain circumstances.

This is obviously raising several discussions in the practice, as some academics in the EU see such duties as obstacle to innovation. This argument is not particularly convincing as seems to lack empiric evidence.

German speaker outlined main features of Directive 2000/31 (e-commerce) and 2004/48 (enforcement) concerning liability of ISPs and also presented case law abstracts on contributory liability of search engines, P2P platforms, mobile Apps (user generated contents), whose liability profiles are less defined in the current practice and might ultimately depend on several factors, including the contract terms between user and provider on exclusive rights and liability, which partly shifts the focus on contractual law matter.

Current EU legal framework (Directive 2001/29) should be understood and studied in light of the national laws in the EU Member States, before and after the implementation of the Directive.

In the second part, EU expert described the UK legislative framework of anti-circumvention provisions and finally drew some considerations on the justification of limitations and exceptions in present economic scenarios as well as on the legislative approaches towards these topics.

Current fast developing internet-driven economy, legislators should take into consideration whether  laws need be improved in order to regulate the role of new “intermediaries” – such as news aggregators, media monitoring services, meta-search engines - in the distribution of copyrighted contents on the World Wide Web.

Recent legislation drafts/regulatory options as well as case law outcomes from different jurisdictions were presented with regards to this topic (US, France, Belgium, Italy, Spain, Germany).

-          Governance of CMOs, also with respect to transparency of decision making and financial management;

-          Criteria for collecting and distributing royalties;

Speaker’s presentation and following discussion focused in particular on the EU Directive 2014/26 on “collective rights management and multi-territorial licensing of rights in musical works for online users”, which should be studied in light of the current fragmented legal framework in EU Member States.

Resale Rights (or Droit de Suite) is not yet provided by current Chinese Copyright Law and the Chinese legislator is seriously considering to introduce this legal institution under new art. 14.

Droit de suite has its historic roots in the early 20th century, being firstly introduced in the French law regime in 1920. It builds on the consideration that artists often achieve their highest fame and recognition in a later stage of their life or even after their death: thus artists’ heirs should benefit from the accrued value of their works.

Nowadays, following EU Directive 2001/84, 11 out of 28 EU countries recognize right of authors and their heirs to participate in the in the increase of value in case of resale of originals of their works and the focus has been  - of course - on works of visual arts. Regulation of resale rights in the practice still vary from country to country.

As to the second kind of issues, one of the main argument put forward by those who are contrary to its introduction, would be that it increases the costs of transaction while reducing the sale prices and would ultimately discourage traders and buyers from marketing in those jurisdictions where it applies, as art trade would migrate to countries without resale rights in force.

The latter seems to be an ungrounded argument, empiric studies – while not entirely conclusive – seem to confirm that resale rights had no impact on the art market in those countries where it was introduced and that traders’ behaviours or buyers’ decisions were not influenced by the presence/absence of resale rights.

In addition, it is the increase in value and not the purchase price itself the real key factor for resale rights royalties.

Currently resale rights lack international harmonization, also on crucial issue such as shifting the royalty burden from seller to buyer or viceversa, and according to recent surveys resale rights would be applied in less than 10% of art sales worldwide.

Therefore, if China adopted resale rights system (currently introduced in the new draft by art 14), the above figures would increase dramatically and this might further facilitate a more harmonized implementation of the Berne Convention.

China is on the verge of introducing resale rights in the national system and particular attention should be put on the future regulations and procedures, in order to maximize efficiency and ensure transparency, especially in the collection and redistribution of royalties: on the example of the German system, art dealers should be subject to account reporting duties on re-sales and collecting societies should be entitled to inspect accounting books of dealers and auctioneers if necessary.

Dg Trade representative provided an overview of the background foundations for regulating copyright on a EU level, which recently led the EC to conduct public consultations on a possible EU Copyright reform.

It is too early for drawing clear clear conclusions in terms of reform policy at this stage though.

A number of important steps towards further harmonization in the EU legal framework have already been done so far, for example through the Directives on orphan works, collective right management as well as thanks to the proactive role played by the EU in the negotiation and adoption of Beijing and Marrakesh Treaties.

Challenges ahead for further harmonization in the EU now lay in issues such as the territoriality and exhaustion regime in the digital environment or in the discipline of copyright exceptions.

As regards resale rights, while the procedures for collecting rights is demanded to the single MS to regulate, the EU Directive 2001/84 sets important principles, such as that it shall apply to any dealers in works of art and in February 2014 a MoU on “Key principles and recommendations on the management of the author resale rights” has been produced, in order to facilitate further harmonization in this area.

On the side of the rights of performers and producers, again the foundation of EU harmonization actions lay in the WIPO “Internet Treaties” (WPPT of 1996 and Beijing Treaty of 2012). Directive 2006/115 provides that a single equitable remuneration should be paid by the user, if a phonogram published for commercial purposes, or a reproduction of such phonogram, is used for broadcasting by wireless means as well as for any communication to the public. Such remuneration should be shared between the relevant performers and phonogram producers by mutual agreement and, in the absence of agreement, national law should set down the conditions of such sharing.

Once again, the EU legislator adopts the legal instrument of Directive to set basic principles by letting the national legislators discipline in details.

Agenda of seminar and speakers’ presentations are available in the document center of IP Key website.

The seminar allowed tackling key issues in the current workings for the reform of copyright law in China, which were not addressed during the previous study visits in Europe or that required additional study.

Discussions held at the seminar allowed both Chinese and EU participants analyse such issues from different angles and perspectives, also highlighting areas that needs to be further investigated in the course of cooperation with LAC in 2015.