Copyright, reforms in Europe and expectations in Latin America: a current and enthusiastic debate that IP Key LA and local partners have ignited in the region. 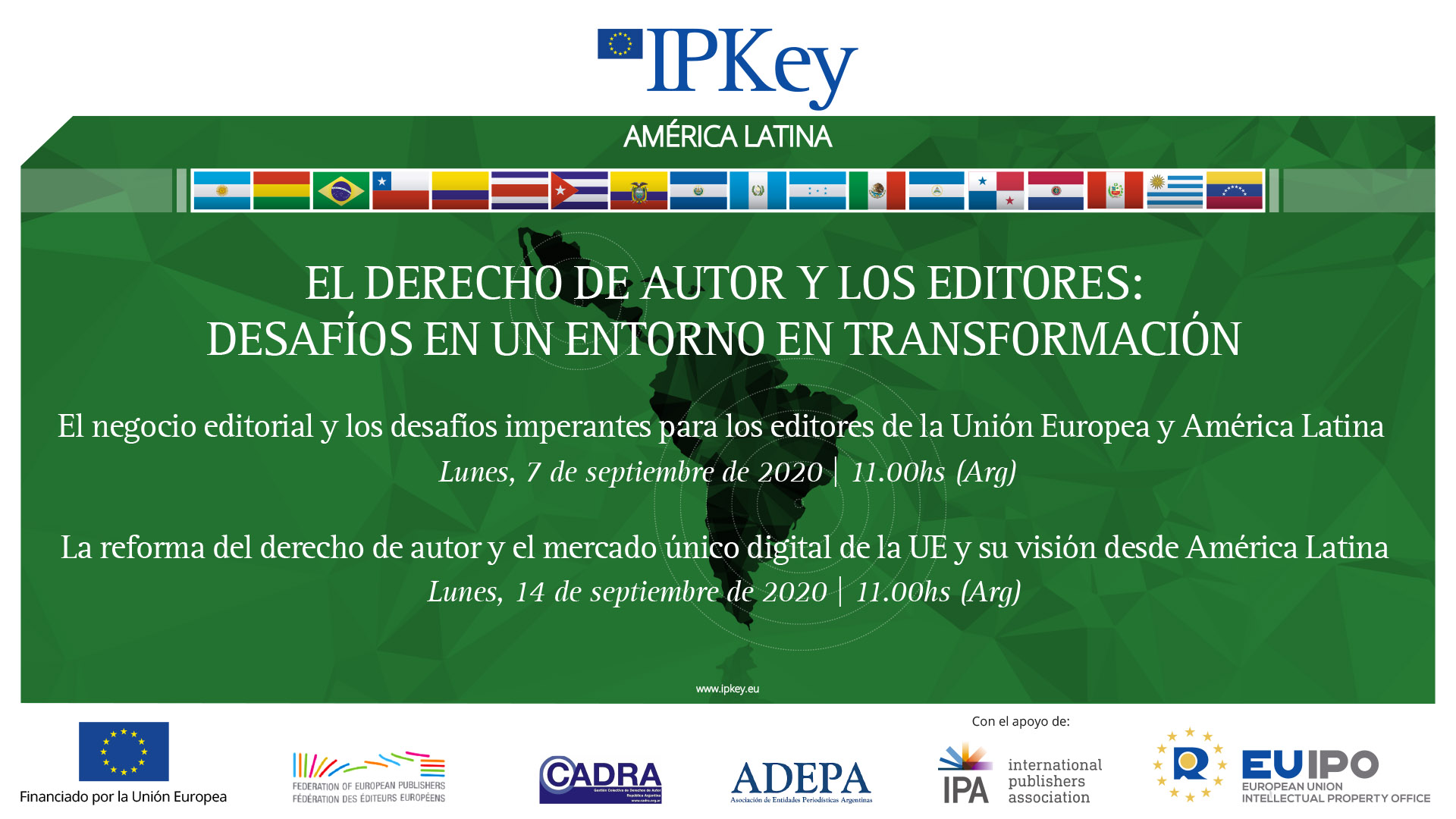 Copyright, reforms in Europe and expectations in Latin America: a current and enthusiastic debate that IP Key LA and local partners have ignited in the region.

During the first half of September, IP Key LA worked with important partners in the area of Copyright in Latin America to carry out an activity that, although initially expected to be executed during the Buenos Aires Book Fair, became a two-day webinar that convened more than 300 people from all countries in the region.

The Federation of European Publishers (FEP), the Center for Reprographic Rights Administration of Argentina (CADRA) and the Association of Argentine Journalistic Entities (ADEPA), in addition to the significant support of the International Publishers Association (IPA), made possible valuable exchanges of information, experiences and expectations in the face of the necessary changes in the publishing and information industry.

During the first day on September 7, the publishers of books convened to establish the needs of the industry and its dependence on copyright protection. Ana María Cabanellas, President of the Latin American chapter of the International Federation of Reproduction Rights Organisations, said that in the past few months they have seen an increase in ebooks, to the detriment of traditional books.

This obliges all parties to modernize the use of copyright: on the one hand, publishers must adapt their contractual practices, to include the rights for digital publishing, since old contracts did not foresee this. This is a problem because, according to Cabanella’s words, "ebooks have greater growth potential than we thought."

On the other hand, all this reinforces the need to act on IP laws, in order to ensure the fair remuneration of publishers and authors, especially in a scenario where piracy growth is recorded.

The complexity of the wide range of pirated books at very low cost, or just free, also gives a sense of urgency to the need of coordinated efforts between the various institutions and management entities, to limit this alternative that, thanks to the Internet, reaches numerous markets simultaneously.

The following Monday, September 14, experts in the media area were convened, such as Association of Argentine Journalistic Entities (ADEPA), the Association of Newspapers of Brazil (ANJ) and the National Press Association of Chile (ANP), among others to address "The Reform of copyright and the digital single market of the European Union and its vision from Latin America".

The emphasis was on the need to ensure the sale of licenses as a business model for the media in the face of the dominant position exhibited by platforms such as Google and Facebook. With examples from France and Australia, in addition to some highlights of the discussions taking place in the United States and the progressive advances being made in Latin America, there are a number of guidelines on how to handle this debate.

However, all experts conclude that this process is quite recent, so it is necessary to give a reasonable period of time to identify the adjustments and negotiations that will be achieved in the medium term and that would replace the radical decisions that some platforms have taken in different cases.

For Javier Díaz de Olarte, Head of the legal area of the Spanish Center for Reprographic Rights (CEDRO), the ease of access to informational content facilitates the perception that it is technically very easy to take that content, copy it and use it as best suited, which makes digital access to this material truly dangerous. "There is an imbalance between those who invest, strive and work to achieve these quality content and those who use that content on their own to develop any activity... This imbalance has reached shocking dimensions," and Directive 2019/790 seeks to restore it in some way.

Although the member countries of the European Union will be able to make this directive a law in the Member States, this discussion is just beginning in the Latin American region, in the absence of specific regulations to ensure the protection of the media and its contents.